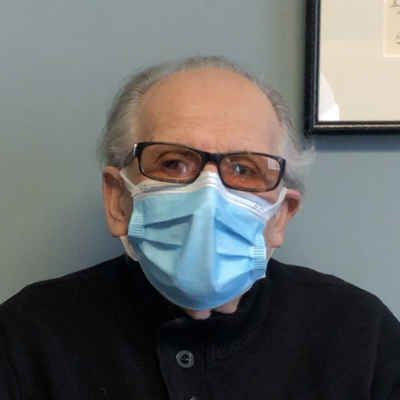 Thank you for talking with me today about your Rezūm procedure. Can you tell me a little bit about how you arrived at a decision to do a Rezūm Procedure.

What kind of symptoms were you having beforehand?

I was getting up at least 5 to 10 times a night urinating. And that was affecting my life. I was always tired. Extremely tired. And sexually, I was all beat up, I couldn’t even think about sex. So I looked into a lot of surgical procedures. I started to look in that direction. Didn’t want to go that way at all! Thought I could beat it, but I couldn’t. It just got so bad. I was doing a thousand CC’s, a liter of urine overnight. Ten times a night. So I was sleeping maybe three hours a night. And that could get to any man.

And medication wasn’t helping you?

And then you decided upon a Rezūm procedure, the water vapor therapy.

I didn’t decide about Rezūm, at all. I first looked into Urolift. Then I saw with Urolift, where a problem occurred when they were tying it off, that they would have to be done all over again, because the clips that held the nylon straps around the prostate would let go. And there was a tendency to go back back into the whole thing again. So I discounted that. Then I looked at Rezūm, and I said to myself, this is something that I can look at. But even with the Rezūm, some of the doctors with Rezūm, I felt they were being paid off, because they were giving all these glowing wellness reviews. “If you do the Rezūm, the prostate is going to shrink.” I was a little reluctant to do the Rezūm at first, to be honest. But the more I looked at it…”minimally invasive”…I got more interested in it. And I said to myself, I’m at the end of my line. I have to make a decision which way to go. And so I fell right into the Rezūm. I said this is the best of all of them, in my opinion. You know the Doctors at that point in time, I thought they were paid off by Rezūm because they were all glowing : “Two or three weeks!” It’s not two or three weeks. You’re going to bleed for at least a month. It’s going to interfere with your life. You’re gonna go through pain. You’re going to be in pain from the procedure. Even though it’s minimally invasive – you’re still gonna get pain. Pain’s gonna be there. But on the fourth week after I had it done by a great doctor – good doctor –

C’est toi (It’s you.) So he did the procedure, and it was painful. The procedure was – minimally painful – wasn’t outrageous – but it was painful. Maybe because of my age too – I just turned 80 about two weeks ago. But I was determined. I couldn’t go any further. My life was at the end, basically. I was falling apart.

How have things changed since your procedure? How about today? How are you feeling?

Eight weeks have gone by – I’m into my ninth week [since the procedure]. The 1000 [CC]’s – the one liter – that I was urinating nightly – and getting up ten times a night – that shrunk down to about 200 ounces to 250. Between 200 and 300. And now I was getting up on the fourth and fifth week, I was getting up maybe once to twice a night. It was SO refreshing to go to bed and get a good night’s sleep. So the one or two times that I had to get up was nothing like before. Before was like ten times. So this was a marked improvement. This was life changing. And each week that went by, it got better and better and better. Now I’m going on my ninth week and I would say that it turned me around 80- 90%. The last hinge on this whole thing, is I still have a little urgency. That’s the other 10-20%…that I have urgency. It is urgency, I have to sort of, pull back on myself, to see if I can stop it from coming. But when it comes, it’s gonna come. But I really think that in the next three to four weeks – I have another month to go – I think it’s gonna resolve itself on its own. I really feel that way. I feel that way because I’ve noticed in the last week I’m not getting as much of that propensity to have the urgency. And so, I’m very enthusiastic about the whole thing. And believe me, you can’t make me enthusiastic over much. I am a stark analyst. This is what I do for work. I research, research, research. And I just think that my life has changed. Completely. I’m not coming on to tell you that it’s going to be no pain. But it’s probably going to be the least amount of pain that you’re gonna go through after the other procedures that are available out there. And as far as sex is concerned…and I know everyone is concerned about sex… It didn’t change my drive before or after. My erections are still as hard as they were in the past – for an 80 year old guy. So, I exercise. I’m vegan. I eat vegan. I don’t eat meat at all. So, I’m in good health. I was torn all apart, but now I feel resolved and I’m very happy. And I made that choice. And like I said, and I know I’m being repetitious, but I had a GREAT doctor do the job.

Thank you, thank you very very much. I appreciate it.

Schedule Your Consultation Today! (781) 337-6737
We use cookies on our website to give you the most relevant experience by remembering your preferences and repeat visits. By clicking “Accept All”, you consent to the use of ALL the cookies. However, you may visit "Cookie Settings" to provide a controlled consent.
Cookie SettingsAccept All
Manage consent

This website uses cookies to improve your experience while you navigate through the website. Out of these, the cookies that are categorized as necessary are stored on your browser as they are essential for the working of basic functionalities of the website. We also use third-party cookies that help us analyze and understand how you use this website. These cookies will be stored in your browser only with your consent. You also have the option to opt-out of these cookies. But opting out of some of these cookies may affect your browsing experience.
Necessary Always Enabled
Necessary cookies are absolutely essential for the website to function properly. These cookies ensure basic functionalities and security features of the website, anonymously.
Functional
Functional cookies help to perform certain functionalities like sharing the content of the website on social media platforms, collect feedbacks, and other third-party features.
Performance
Performance cookies are used to understand and analyze the key performance indexes of the website which helps in delivering a better user experience for the visitors.
Analytics
Analytical cookies are used to understand how visitors interact with the website. These cookies help provide information on metrics the number of visitors, bounce rate, traffic source, etc.
Advertisement
Advertisement cookies are used to provide visitors with relevant ads and marketing campaigns. These cookies track visitors across websites and collect information to provide customized ads.
Others
Other uncategorized cookies are those that are being analyzed and have not been classified into a category as yet.
SAVE & ACCEPT
Menu
Patient Portal